CAC: Fear and Curating in Chicago by John Brunetti 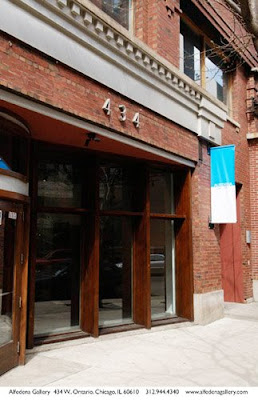 Fear and Curating in Chicago

An interview with and by John Brunetti, Director, Alfedena Gallery

What motivated you to become a curator?

JB: Yes, seriously. Fear can be a great motivator. It can either hold you back or set you free. I had never intended to be a curator, just as I had never intended to be an art critic. Those were two jobs that grew out of my desire to survive in the arts after I got my MFA in 1987. My original intention was to be a painter. But in the case of my painting career, fear kept me from making that happen, so I decided to start making fear work for me in other ways.

Sounds like the origin issue of a super hero comic.

JB: I lived and breathed Marvel comics as a kid, so I guess I am a student of Stan Lee as well. I always loved that line from Spiderman: “With great power comes great responsibility.” My fear of being the subscription manager at the New Art Examiner for too many years was greater than the fear I had of the blank page, so that is how I started writing art reviews.

Let’s get back to curating. What was the first show you curated, and how did that come about?

JB: In 1999 I was asked to curate a group show for ARC Gallery. At that point I had been writing art criticism for about nine years. I accepted the offer to curate this show because I knew that I had to expand my skills to remain employable in the arts; I was getting older, and Mr. Fear was starting to make occasional visits in the middle of the night.

It doesn’t seem that it would have been that complicated for you to put on a show.

JB: Well, you have to remember that as a critic I had seen my share of poorly realized group shows, and I didn’t want to follow in that pattern. Moreover, writing by its nature is a very solitary endeavor, while curating — good curating — is a collaborative art that embraces artists, breathing people. The years of writing gave me access to many artists to consider for the show, so that taught me an invaluable lesson: See and be aware of as many artists as possible, and talk to these people, listen to these people, look these people in the eyes. Visit their studios not only to see what they are working on now, but the direction in which their work is going. Most shows are planned one or two years in advance, so it helps to anticipate where an artist is going with his or her work. From that point on I started to keep a little black book, not to get dates, but to be able to pick up the phone and make a show happen.

You mentioned earlier that you saw many poorly realized group shows. What did you mean by that, and how did you avoid that yourself?

JB: I was always seeing group shows through the lens of writing criticism. A success to me was when the show conveyed something more than the sum of its parts. This means, Do the works in the show communicate with each other as much as they do the viewer? Is there a compelling dialogue going on? A good group show should echo a good dinner party where overlapping conversations reveal more about the guests than they realize.

So who is your audience as a curator — the critics? the public? artists?

JB: When I worked for the Evanston Art Center, I was conscious of curating shows that provided many different entry points to diverse audiences that ranged from children to those more familiar with contemporary art. This was central to the art center’s mission. I found a way to strike a balance by showing work that could be interpreted through formal elements as well as conceptual ideas. A large part of making this happen was listening to the needs of their executive director, Alan Leder, and earlier Peter Gordon, and the exhibitions committee. To be successful as a curator you should have a strong sense of the institution you work for and its audience.

JB: Until the next show goes up, I always fear the empty white cube of the gallery.
Posted by Chicago Artists' Coalition at 12:46 PM