CAC Perspectives: Chuck Thurow on the Death of Artists

The Chicago Artists' News, the CAC’s monthly paper, has a feature called “Perspectives,” in which established artists, critics, and other art-world figures pinpoint and analyze art-related practices and developments that have caught their attention, with the aim of eliciting discussion about those phenomena.

In this article, which appeared as a “Perspectives” column in the November issue of Chicago Artists’ News, Chuck raises the question of how to facilitate arts patronage in Chicago so that artists can flourish.

We want to hear from you with your thoughts about the state of arts patronage in Chicago. How can artist-patron relationships be established and maintained? How might the arts patronage community be democratized? And what role should critical art writing — in newspapers, journals, or blogs — play in all of this? As with all future contributions, we would look forward to your responses to the issues raised in this column, so please don’t hesitate to join in the conversation. 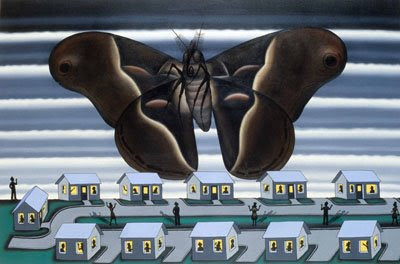 Roger Brown, Mothra At Inner Circle Drive, 1988, o/c, 48 x 72″. Courtesy of The School of the Art Institute of Chicago and the Brown family. © SAIC


The Death of Artists and Its Causes
By Chuck Thurow

My mother died at the beginning of September. At the time, I stated in the obituary that the cause was “old age” (even though she was only 96 and her mother had lived until 103). When I received the death certificates, I discovered I was wrong. According to the eminent gerontologist Dan Brauner, the cause was “failure to thrive.”

I had not realized that the result of the failure to thrive is death. It gives a new urgency to the Hyde Park Art Center’s mission, which includes “making Chicago a city in which artists can work and thrive.” The rotting corpses of artists scattered about the streets of Chicago is not a pretty sight to contemplate; consequently, I want to discuss how we can assure that artists thrive. 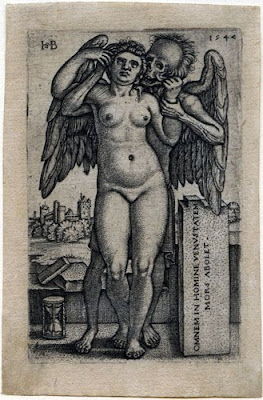 Death and the Standing Nude by Sebald Beham

When discussing this topic with artists the first item that comes up is individual artist’s grants, i.e. money. Money is good. There is no doubt about that — particularly if there is plenty of it and it is spread around among lots of artists. The phenomenal success of the Works Progress Administration in Chicago is to the point: paying artists to stay in their studios and produce art worked. The quality and innovation of the work is striking — especially with the African American artists that were in the orbit of the South Side Community Art Center. It’s also instructive how quickly many of these artists stopped producing when the money was turned off and they turned to other ways to support themselves. (The federal government, it also must be noted, did not realize the cultural treasury they had created, and much of the work was trashed at the end of the program.)

Such a system is still doable. New Zealand, for example, provides a financial safety net for all of its artists. It seems, however, a pipe dream in current U.S. culture in which money is being concentrated into fewer hands, not spread among the many. The Illinois Arts Council’s and the Department of Cultural Affairs’ individual artist’s grants do continue, and, although small, need to be applauded. I clap less enthusiastically for the foundation-based grants such as the MacArthur Fellows, United States Artists, Creative Capital, The Driehaus Awards, Artadia, and the soon-to-be Three Arts Foundation grants. These well-meaning efforts strive mightily for diversity and inclusion, but also end up reinforcing the random walk of artistic success. They do not introduce any true democratic character into the process. 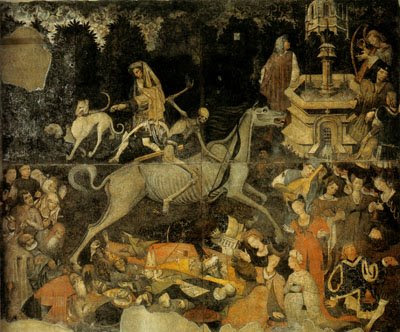 If artists are to thrive in Chicago, for better or for worse (I would argue for the better), we must build and expand the character and number of the individual patrons who support artists — not government, corporations, or foundations. In discussing the Hyde Park Art Center efforts to support artists, artist Ron Jones once told me: “If a city has a good patron community and good critical writing, you don’t have to worry about the artists. They will take care of themselves.”

Ron is the artist who created the now demolished Pritzker Park on the 300 block of South State Street. He is currently a professor of design in Stockholm. It was a fresh notion: the idea of not worrying about the artists, but instead of worrying about the patrons intrigued me. (We will have to discuss critical writing in Chicago another time.)

If artists are to thrive in Chicago, it is critical that we make the patronage community democratic — not a club that only includes Ken Griffin, Marilyn Alsdorf, and Fred McDougal. The developer who gives free space to Mess Hall in Rogers Park should be celebrated as heartily as those aforementioned, and he may be making as big an impact on Chicago art as they. To develop this community is not difficult, but it needs artists and others to focus on it as a goal. Patrick McCoy’s organization in Bronzeville, Diasporal Rhythms, is right to the point: it encourages a broad spectrum of the African American community to take responsibility for its artists. 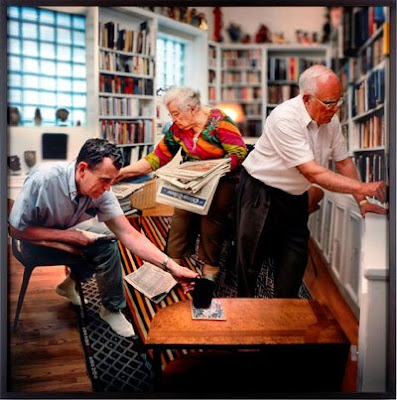 Ben Gest, Chuck, Alice, & Dale, 2003. MCA Collection, gift of
the artist and Daiter Contemporary, Chicago. (This work was part
of Not Just Another Pretty Face at the Hyde Park Art Center.)

Likewise, the Hyde Park Art Center is starting up its Not Just Another Pretty Face project again. This successful effort links artists with individual patrons, and together they decide on a work for art. It turns out this type of patronage not only supports artists financially but stimulates their creativity. A number of the artists in the previous two rounds subsequently developed new bodies of work stimulated by the initial efforts. Others experimented with new techniques that led to major commissions later. And others produced quality work that has been exhibited in major museums. The record on the side of the patrons is similar: contemporary art became immediately relevant to their lives. As a consequence, they not only have continued as enthusiastic supporters of the artists with whom they worked, but a number of them have also developed into leaders within the contemporary art scene — joining boards and organizations.

We at the Center have discovered that once people realize that significant patronage is not just the purview of the rich, they want to be involved. They have fun. They bring enthusiasm and energy that actually keeps artists alive and working. I am not arguing the inappropriateness of advocacy groups such as the Arts and Business Council (focusing on corporations) or the Illinois Arts Alliance (on governmental budgets and policies) or even the Chicago Artists’ Coalition (on artists themselves), but instead I am arguing that we are missing an organized effort to make a broad spectrum of the population into active patrons of the artists rather than simply the consumers of art — the audience numbers that we as organizations report to foundations and government

So here is my plea: more patrons so there are fewer dead artists. I already know too many.

Posted by Chicago Artists' Coalition at 10:34 AM